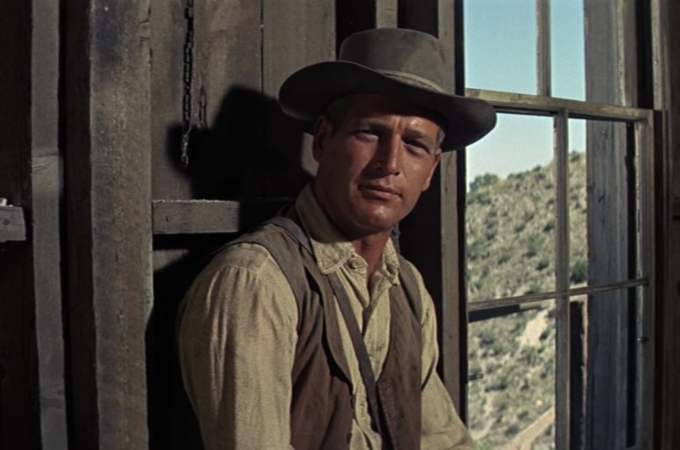 This is actually a very old post from an old Yahoo group I had where we’d recommend movies and then write about the philosophy we saw expressed there. I posted another of these some time ago about a movie called In The Company of Men. This one is about a film called Hombre. It was published on Filmintegration February 23, 2004 and I’m posting it here because I’m planning on publishing a post that alludes to it. Here you go!

Spoiler Alert! This post reveals the ending of the film. If you intend on watching it – watch it first and then come back.

I had read a short review of Hombre (Paul Newman, 1967) where it was referred to as a “stinging indictment of altruism.” It is actually hard to tell whether the movie intends to attack or to advocate altruism.

The pivotal scene unfolds when a small group of people including Russell, are waiting to travel on the stage coach. As they wait, a large and intimidating character named Grimes (Richard Boone) attempts to book passage on the same stagecoach, but is told that the coach is full. Grimes, however, is not deterred and demands that one of the passengers give up his ticket. He begins his intimidations with John Russell. Russell refuses, but when it is apparent that the bully isn’t going to take no for an answer, a soldier comes to his aid. He tells Grimes to leave Russell alone. Grimes obliges, turning his attention to the soldier’s ticket instead. No one speaks up for the soldier, including Russell, who sits by quietly. Eventually the soldier, threatened with a gunfight, gives up his ticket and leaves unhappily. Jessie (Diane Cilento) admonishes Russell for not coming to the soldier’s aid. “He would have helped you,” she points out. “I didn’t ask for his help,” Russell maintains.

But later we will discover that Grimes is a bandit who, along with some fellows who will meet up with the coach, intends to rob the passengers. The passengers, none of whom would think of carrying a gun, come to depend on Russell, who of them all is the only one who can both defend them and lead them to town. Russell and Jessie again clash in their moral views when Jessie maintains that people must help people. “Why?” asks Russell. “Because he needs it,” she answers. “Only help?” asks Russell. “Do we have another choice?” answers Jessie. “Not help?” he responds. Russell apparently believes in helping people based upon merit, while Jessie believes in helping people based on need. But neither of them actually questions altruism. Indeed, earlier Russell helps his Indian friends escape a fight with a man who will later be among those who turn up to rob to the stagecoach but fails to defend the soldier against Grimes. He has criteria for helping, just not the right ones.

This final dialogue is full of inconsistencies, hostilities, and tribal associations, but one thing is clear. Neither Jessie, nor Russell fully understands ethics. The other characters add their two cents, mainly thoughts of a reward in the hereafter and a minor debate about whether there is no heaven, only hell.

Ultimately, Russell fully integrates the altruist philosophy, and goes to his death, not for the sake of the woman, perhaps, but for the sake of the Indians. His argument against helping the woman turns to excuses that she has insulted the Indians. Russell never does find out why he ought to have helped the soldier, though. He seems almost fated to die as punishment, although at any time he could have corrected his views and avoided his ultimate end.

So why help? Why should Russell have helped the soldier? It’s rather simple, really – because it was in his interests to keep a man like Grimes, an obvious criminal, off the stagecoach he would be traveling on. If Russell had not been blinded by his tribal views, he might have noticed that.

Looking Out for Yourself   You Have a Right to What?