To Serve Man and the Tower of Babel 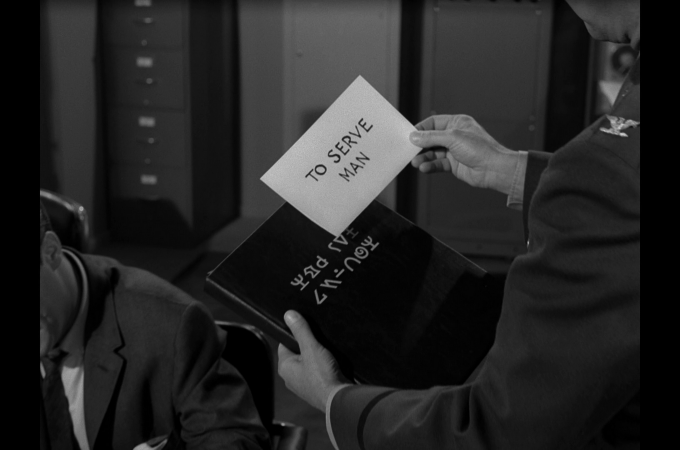 At some point in your life, if you’ve been paying attention, you discover the meanings hidden in the stories and idioms of your childhood.

For example, I’d used the idiom “burning the candle at both ends” for a good chunk of my life before I finally realized “ends” referred to the day and not the candle, that it was dark early in the morning and late at night, and that all those years ago people actually needed to burn candles for light.

This helped me to understand, too, that younger people don’t always get what you’re saying even if they are familiar with the words and phrases you’re using. They are not familiar with the higher concepts. This might be because nobody’s ever mentioned it to them, or because they’ve never actually had reason to reflect on them – or probably both.

So, today, while taking a walk to the cafe for some coffee, I thought about how some of my favorite Twilight Zones expose nicely what the PTB is doing with this Coronavirus nonsense. Particularly, To Serve Man.

That sentence is incomplete. Let me fix it for you …up for dinner.

Oh, you didn’t know that Twilight Zones were parables? You thought they were just funny stories that made you think?

But these concepts are not unique to Twilight Zone. The techniques that the PTB use are not exactly new. For example, another metaphor that came to mind on my walk was The Tower of Babel.

We’ll start with the most important word here. God.

In the story, “God” confounds the language of the people so that they cannot attain his power. Only the real God has no need whatsoever to do this. Only false gods need to act. The word “god” has been “confounded.” Who did that? Who needs you to be confused?

Today, as you walk about with your face covered, you can hear democrats and republicans all talking about “racism” and “unity” and “liberty” but these words have been so utterly confounded that they can no longer communicate.

The Tower of Babel is the story that essentially warns you about Newspeak.

I mean, after all, just what does it mean “to serve”?