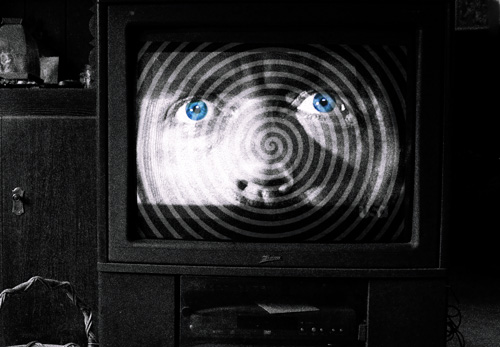 I watch a lot of TV.

I know, I know… it rots your brain, right?

Well, it certainly can, and the reasons behind that are two-fold.

First, if you are a child, or the type of person who prefers not to reflect on things, you can be easily swayed to believe whatever the TV wants you to believe. If that wasn’t the purpose of TV when it was first invented, it has certainly been put to that use by now.

In essence, media today takes the place of the church in olden times. People would gather in the church. They got their news and their beliefs from the priest. It was a means of propagandizing. (Hey, that’s why the church would kill you if you publicly said anything that might interfere with their plans for the sheep, ok?) Today the media plays nearly all the church roles. It hires priests (also known as politicians and scientists) and it puts on lots and lots of morality plays (sitcoms, dramas, “reality” shows…). In that way it teaches you what to believe and how to behave. It works because much of the information we take in and process happens unconsciously. Weeding through all that stuff is the conscious process of reflecting, something far too few people do. (Hey, it’s work.)

Now, not all media is in on it. My blog isn’t. (Ha ha! Maybe it is! No…) The internet is just brimming with real journalists and pundits – people who are doing their own thinking and are simply expressing themselves. It’s just that those who are not official don’t reach the great mass of unwashed people. You’ll know if you start to because if you’re not saying the right things, someone will try to shut you up. That’s what SOPA, and all those crazy copyright laws are for – oh wait, you thought those were to protect you?

Anyway, that’s the first way it will rot your brain. Well, not rot your brain, just turn you into a zombie. Okay, that is kind of like rotting your brain. The only difference is, your brain is actually still fine. You can change it whenever you like. The longer it’s like that, though, the harder it is.

But there’s another way that TV rots your brain (and eats up large amounts of otherwise productive time)… it’s very, very, relaxing. It’s kind of like a smoke or a drink. It talks to you. Lulls you to sleep. It tells you a bedtime story. Even if you are well aware, as I am, that a lot of it is horribly slanted, and you tend not to fall for the propaganda, it can still be a lot like a drug, causing you to lay around when you could be doing something more productive. It can fill you with apathy. It’s a dangerous drug, really, if you don’t manage it.

When my mother passed away in 2001, I watched more TV than ever before. That’s how I became addicted. I realized its benefits in overcoming grief. Back then I watched a lot of History Channel. I think it made me feel better to imagine a time when Mom was not just alive but young. I also watched a lot of Court TV and Cartoon Network – the escapism aspect should be obvious in the pairing of those two. What TV served as for me at that time is simply this: a pacifier.

TV really is the Great Pacifier.

So, I’ve come to call watching too much TV – especially inane TV, the kind that educates you on no real useful topic, as thwocking. That’s the sound the pacifier makes as you suck on it… TWHOCK THWOCK THWOCK…

An entire nation of us. Addicted. A kind of silent addiction. Well, except for the…

How do you battle a thwocking addiction? I’m not entirely sure. But here are some things I’ve been trying:

That’s all I’ve got so far. Going cold turkey is always good. But then, that’s just another reason why, despite all the apocalyptic visions to the contrary, I doubt that power to the TV is ever likely to be out for too long…